Hello and welcome to the Reignited Blog Tour hosted by JeanBook Nerd! I've been a huge fan of Colleen Houck since her Tiger's Series released, and so I couldn't not be excited for her Reawakened series, Reignited included! Today I have for you, my review and excerpt of the book, as well as a giveaway! So I hope you enjoy, and good luck with the giveaway! 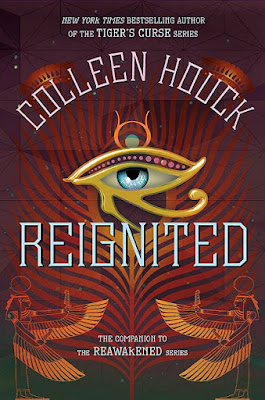 A sibling rivalry.
A forbidden romance.
A spell that changes everything.

In Heliopolis secrets abound and passions ignite as chaos rises.

From the  New York Times  bestselling author of the Tiger’s Curse series and Reawakened comes a novella full of celestial marvel, passion, betrayal, and evil that will grow to reign over humanity forever.

Before Lily and Amon met, before the cosmos was in chaos and needed three brave brothers to fight off evil, there were four siblings who helped rule the earth.
Each sibling had a special gift. Osiris, the god of agriculture, helped mortals to grow and thrive in their natural environment. Isis, the goddess of creation, fostered health and wellness. Nephthys, the seer, was able to keep the balance between all living beings and the universe. But Seth, the youngest sibling, was left without any special powers. The Waters of Chaos, which granted each god’s talent, were running dry, and Seth was paying the price.
As time passed, however, Seth’s determination and willfulness resulted in a very special gift, one that should have granted him the ability to enact wondrous change. But Seth’s competitive childhood gave him a heart so cold and vacant that instead, his gift brought about great evil.
Seth was now the god of unmaking, the creator of disorder and destruction. And he was ready to seek his revenge, dominating all who got in his way.


The cosmos will be in harmony.
There will never be a time when I'm not excited for a Colleen Houck book, especially when it involves her Tiger series or her Reawakened series. Reignited was no exception.
Myths are always varying depending on who is telling the story, in this case Houck was telling them. In Reawakened we learnt of the three brothers that were given immortality to stop Seth from taking over the world. Although we learnt of Seth and his powers, we never really knew why he wanted the world to end. In Reignited, we learn about how Seth came to be the way he is, and who he was as a person before Reawakened occurred. I really enjoyed how Houck made the story to give us more background to his character, I feel like with Reunited releasing in August, I'll be all that more excited to read it!
With Colleen Houck books, you always get that romance that you can never shake. Even with this being a novella, Houck doesn't leave you empty handed. Even in the short time we got to know them, I really loved Osiris and Isis' relationship. Their love for each other was sweet and very dedicated, you couldn't not want to read more of their story.
Reignited was short and sweet, and has me very excited to continue on with the series. The finally book Reunited releases August 2017.

"I'm to warn you."
Warn me of what?
That the path you're taking is a dangerous one."

Seth seized the woman by the throat, lifted her off the ground, and shook her.
“You will cease your caterwauling immediately.”

When she didn’t, he threw her on the ground and shouted, “By the gods, I wish the heavens would erase your face from my view!”

Her cries were suddenly cut off and all that could be heard was the bleating of the animals and the crackling of the wheat as it burned.

The woman had crumpled to her hands and knees. Her whole body shook but no sound came from her. Sticking the toe of his boot beneath her bulky form, he thrust her aside and her body rolled away.

Seth gasped. Where there had once been a hooked nose, thin pale lips, and eyes that sat too close to one another, he now saw a blank oval.

Skin as smooth as a reddening peach stretched where a face should have been.

The woman’s hands reached up, clawing, gouging the skin where the mouth and nose once were. But as if a switch had been flipped, her body jolted and then she slumped over, dead. 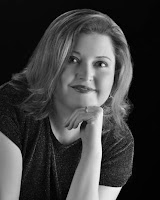 New York Times Bestselling author Colleen Houck is a lifelong reader whose literary interests include action, adventure, paranormal, science fiction, and romance. When she’s not busy writing, she likes to spend time chatting on the phone with one of her six siblings, watching plays, and shopping online. Colleen has lived in Arizona, Idaho, Utah, California, and North Carolina and is now permanently settled in Salem, Oregon with her husband and a huge assortment of plush tigers. 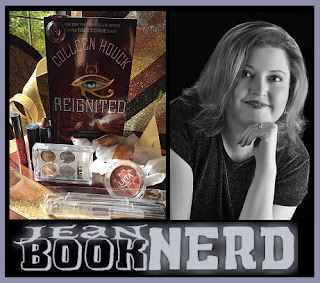 Thank you so much for stopping by! I hope you enjoy the book, and if you haven't had the chance to pick up a copy of Reawakened yet, then the whole series!

A Dream Within a Dream REVIEW & RANDOM THINGS
Rose's  Book Corner REVIEW
Posted by Stephanie Ehmann at 5:00 AM